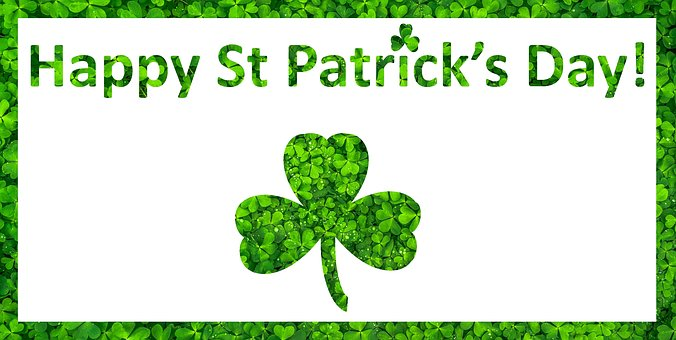 Ready to learn about some St. Patrick’s Day Traditions?

St. Patrick’s Day is when we’re all Irish. And the reality is that a lot of us are, at least a little.

But the irony here is that large-scale St. Patrick’s Day traditions, as we know them, are pretty much an American phenomenon. These large celebrations were a way for Irish immigrants to maintain and celebrate their cultural identity in their new Protestant homeland.

In fact, the very “first recorded St. Patrick’s Day parade was held not in Ireland but in New York City in 1762, and with the dramatic increase of Irish immigrants to the United States in the mid-19th century, the March 17th celebration became widespread” (History).

So let’s take a look at some American St. Patrick’s Day traditions as a way to celebrate this thoroughly Irish holiday.

Who was St. Patrick?

Before we get into St. Patrick’s Day traditions, let’s first discover who St. Patrick is.

It seems fitting, then, that St. Patrick, the Patron Saint of Ireland, wasn’t even Irish at all. He was, rather, from Britain, born in the late 4th century into a British Christian family of Roman citizenship.

Patrick was captured by Irish raiders when he was 16 and was carried off to Ireland where he was forced to tend flocks. His captivity lasted four to six years until he finally escaped and returned to Britain. But he couldn’t stay away from Ireland.

Patrick felt called to return and try to Christianize the pagan (and fierce) Irish. So he “studied for 15 years before being consecrated as the Church’s second missionary to Ireland. Patrick began his mission in 432, and by his death in 461, the island was almost entirely Christian” (History).

But he didn’t really drive out all the snakes – there never were any. The island was too cold for snakes when it was still connected to the main landmass, and when it broke away and became an island, no snakes went with it.

Once introduced to Ireland, potatoes quickly became a staple food, cheap and easy to grow. As all avid gardeners know, you should plant your potatoes on or near St. Patrick’s Day.

“Potatoes have an intriguing history in Ireland that goes back to the 1600s when Britain introduced the vegetable as an ideal food source for their first colony’s peasant population. By the 1840s, this nutritious vegetable had helped to decrease infant mortality rates in Ireland.

“Although the Great Potato Famine destroyed potato crops across Ireland in the early to late 1840s, it spurred plant breeding programs and the introduction of disease-resistant potato varieties. The famine is credited by some historians with stimulating modern agricultural science” (Burpee).

So the Irish have a long association with the potato. It’s no wonder, then, planting potatoes on St. Patrick’s Day, which falls near the first day of spring, is a tradition still observed by many gardeners. There’s nothing magical about planting on this day. It’s just a fact that in most areas planting potatoes in mid-March usually yields a better crop.

There’s probably no other drink in the world as Irish as Guinness stout, and it’s definitely the drink of choice on St. Patrick’s Day.

But if you’re going to celebrate with a glass of Guinness, you have to know how to pour it properly. Begin by tilting your glass at about a 45-degree angle, and then pour slowly from the bottle into the glass. When the glass is about three-quarters full, put it aside and let it settle for a few minutes. Then after the head settles some, go ahead and pour the rest in, filling the glass full.

There was a time not very long ago – before the current craze for smoking and barbecuing – when brisket (which corned beef is made from) was a very cheap cut of meat, often being ground up for hamburger. And that’s probably the main reason it is now connected with St. Patrick’s Day.

As with other St. Patrick’s Day traditions, corned beef, and cabbage are more American than Irish. It’s just that most Irish immigrants were poor, and the corned beef brisket was more affordable than other cuts.

“While Ireland produced large amounts of corned beef, it was nearly all for trade. The corned beef was considered a luxury, and largely much too expensive for the Irish to consume. Instead, they relied on dairy and pork, and especially salt pork, a relative to bacon.

“Our association of corned beef as traditional Irish fare can be traced back to the 19th century and the Irish immigrants to the US. While the newly immigrated Irish were used to eating salt pork back at home, its nearest counterpart, bacon, was prohibitively expensive in the US. Their best option for lower-cost meat was . . . you guessed it: corned beef.

“What was once a luxury item became a food that was now inexpensive and readily available. So it was the Irish-American consumption of corned beef that initiated its association with Ireland and the holiday of St. Patrick’s Day” (Kitchn).

As for cabbage, it was and is an inexpensive vegetable, so it was paired with corned beef. It became a food for the Irish immigrants, and it stuck as a side dish.

Wearing green is one of the most well-known St. Patrick’s Day traditions.

Ireland is green, very green, much greener than most parts of the US.

If you’ll recall, Sean and Allan O’Brien in Lonesome Dove (the two befuddled and lost Irish immigrants the Hat Creek crew rescued in Mexico) were utterly astounded by the fact that there was so little grass in south Texas, that everything was brown and sere.

And then there’s the green shamrock, a three-leafed clover plant. Legend has it that St. Patrick used the shamrock, with its three leaves on one plant, to help the pagan Irish understand the Christian doctrine the Trinity. Whether that really happened or not, the shamrock is now associated with all things Irish.

With all that green associated with Ireland and Irish things, it was inevitable that wearing green would become one of many St. Patrick’s day traditions. And if you don’t wear green, you just might get pinched – another entirely American St. Patrick’s Day tradition.

Wearing green was said to make you invisible to leprechauns who would pinch you for not wearing it. So, likely in the early 18th century, people began pinching those who didn’t wear green as a reminder of what the leprechauns would do.

If you want to avoid pinching, check out Wholesale For Everyone for your St. Patrick’s Day traditions. Even just a green hat or a green bandana will keep you safe.

The Brand-New Mardi Gras Twist for 2019

Places Around the World: 10 of the Unlikeliest St. Patrick’s Day Events