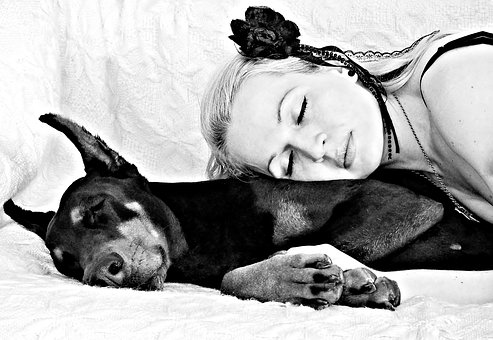 The dog is a woman’s best friend…especially at bedtime. So, sorry, guys, you come in a distant second at best. And now there’s scientific research to back up what we’ve long suspected — women prefer to sleep with their dogs.

But why do women prefer to sleep with their dogs?

How We Got Pet Dogs

When, where, and how did we get our beloved pets? What is the origin of the domestic dog? Well nobody knows for sure, but there are two schools of thought on this.

One holds that domestication took place mostly in one place and at one time or period. The other maintains that “the process of domestication occurred in a number of places and at a number of times throughout prehistory.”

One Place, One Time School

“Dogs were the first animal to be domesticated by humans. The oldest dog fossils that can be clearly distinguished from wolves are from the region of what is now Germany from around 15,000 years ago. However, the archeological record is ambiguous.”

But an international research team analyzed the “DNA from two prehistoric dogs from Germany” and “determined that their genomes were the probable ancestors of modern European dogs. The finding suggests a single domestication event of modern dogs from a population of gray wolves that occurred between 20,000 and 40,000 years ago” (ScienceDaily).

‘This second school of thought takes into account the fact that people likely began to cooperate with wolves at various times in different places. Here’s how that incontrovertible font of knowledge Wikipedia puts it:

“This suggests that dog domestication may have taken place in different regions independently by hunter-gatherers, in some cases at the same time and in other cases at different times with different wolf subspecies producing different dog lineages. Therefore, the number of dog domestication events is not known.”

But what is known is that we now have our furry friends – in all shapes and sizes and colors and dispositions – and that there is a strong bond between women and their dogs.

Women Prefer to Sleep with their Dogs – The Bond

Sure, we still have working dogs – herding dogs and hunting dogs, for example – but now most dogs are mere pets, spending all or at least some of their time inside the house. And that means they spend most of their time around the nurturing half of our species. Because of this strong bond, women prefer to sleep with their dogs.

The bond is strong because dogs function as “exercise motivators, stress relievers, non-judgmental listeners and support systems,” as well as protectors.

Here’s an illustrative example from Canine Journal: “Single, married or post-break-up, women are bonding with their dogs like never before. Sarah Rodgers of Vero Beach, Florida, was married two years ago and is now mother to one-year-old son Jax. Her dog, Porter, a leggy Rhodesian Ridgeback mix, was five years old when Jax was born.

And after a difficult break-up, you can only imagine just how much women prefer to sleep with their dogs.

“Sarah’s concerns were not about her newbie parenting skills or her dog’s relationship with the baby. She worried instead about how Porter felt about all the changes. ‘I did everything with Porter before we had the baby,’ Sarah says. ‘Now he gets the shorter end of the stick, so I’m always looking to give the dog some special time.'”

Not only do women prefer to sleep with their dogs, but they’re opting for pets over motherhood.

“[O]ver the past seven years, the number of live births per 1,000 women between ages 15 and 29 in America has plunged 9 percent. At the same time, research by the American Pet Products Association shows the number of small dogs . . . in the United States has skyrocketed, from 34.1 million in 2008 to 40.8 million in 2012.” And according to marketing researcher Damian Shore, “There’s definitely some replacement happening there” (New York Post).

There’s still more to this phenomenon, though.

Let’s discover some interesting facts as to why women prefer to sleep with their dogs.

A 2018 study, conducted by researchers at Canisius College in New York and published in the journal Anthrozoos, found that women report better-quality sleep when sleeping with a pet dog.

In this study, researchers surveyed and gathered data from 962 US adult women to explore the impact of sleeping with a pet on sleep quality. Of the 962 women surveyed, 57% reported human bed partners, 55% shared their bed with at least one dog, and 31% with at least one cat. The findings? The women who slept with a dog (or dogs) reported better quality sleep than the others.

Stanley Coren, writing for Psychology Today, explained some aspects of the study. “If we focus on the women’s perception of the quality of their sleep, those who shared their beds with a dog reported significantly better and more restful sleep. They also claimed that their dogs were less likely to disrupt their sleep than their human partners.

“Using a scale which measured the emotional tone that they experienced in bed, the researchers found that women actually felt more comfortable and more secure when sleeping with a dog compared to when they were sleeping with another human.”

So why do women sleep better, more restfully, and more securely when sleeping with a dog rather than a human? There are two probable reasons that account for this. Let’s take a look into just why women prefer to sleep with their dogs.

Simply owning a dog usually results in a more structured routine and, as a consequence, a more consistent sleep routine. And “having regular sleep and waking schedule helps to strengthen the circadian rhythm, which, in turn, tends to improve sleep quality” (Psychology Today).

In addition, the study researchers suggested, sleeping with a dog may improve sleep quality because it can reduce the incidence of bad dreams – which has been found to be the case with PTSD-afflicted veterans who sleep with their service dogs.

Whatever the reason, having a dog in the bed appears to improve both sleep quality and experienced comfort for women. That’s why women prefer to sleep with their dogs.

What It All Means

In essence, women prefer to sleep with their dogs.

The upshot of all this is that the way to a woman’s heart is through her pet, specifically her dog. And that route is usually paved with pet accessories.

Dog bandanas are the hottest trend in pet accessories right now. So, guys, you know what you need to do if you want to be able to take Rover’s spot.

When thinking about a gift, keep in mind women prefer to sleep with their dogs and spoil them too. Get a dog bandana as a perfect I love you present!

Discover Pupcakes . . . Where Dog Treats and Cupcakes Meet at The Queen’s Cups