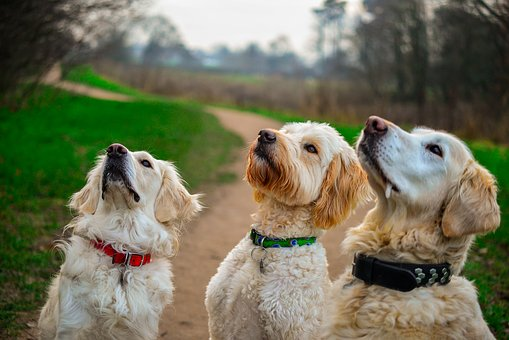 You may be wondering what’s new in dog treats.

Dog treats have come further than you might think…

Do you have any idea how much money Americans spend on pet food and pet treats? Well, in 2018 we spent more than $32 billion on both pet food and treats (American Veterinarian). As of 2004, over 77% of all dog-owning households bought treats for their furry family members. (And that percentage is surely higher now.) In addition, in 2015 almost one-fifth – 17% – of dog owners spent more than $30 each month on treats (Pet Food Industry).

Now let’s do some calculations…

Still, it has taken us over a century and a half to reach this point. And dog treats are still evolving – now having become everything from expensive doggie health foods to custom-baked desserts for dogs. Keep reading to learn what’s new in dog treats.

Before we get into what’s new in dog treats, we first have to discuss dog treats since the beginning.

Dog treats got their start in 1860, when an electrician from Ohio, James Spratt, made a trip to London in order to sell lightning rods. While there, he observed stray dogs at the quays eating discarded hardtack, the hard-baked dry biscuits that sailors stocked for sea voyages. Seeing that, Spratt resolved to create a similar dry biscuit for dogs. And he did…

Spratt created and was soon marketing his Patent Meat Fibrine Dog Cakes, “a mix of grains, beetroot, vegetables, and ‘the dried unsalted gelatinous parts of Prairie Beef,'” as the advertisements of the time described it. “The biscuits were expensive – a 50-pound bag cost the equivalent of a day’s wages for a skilled craftsman – but Spratt’s target market was England’s country gentlemen. . . . By 1895. Spratt’s was established in the United States and dog biscuits were soon being described in The New York Times as ‘the principal food’ of show dogs.”

The modern, bone-shaped dog biscuit, however, had to wait till 1907. That’s when inventor Carleton Ellis (who also invented margarine, varnish, and paint remover) came up with the idea. “In 1907, at the request of a slaughterhouse proprietor looking for something to do with ‘waste milk,’ [Ellis] devised the recipe for a milk-based dog biscuit. His dog, however, was unimpressed – until Ellis baked the biscuit in the shape of a bone.”

It wasn’t till after World War II, though, that the dog biscuit made its transition from meal to treat, owing primarily to the post-War prosperity in this country. And, today, the dog-treat industry is a multi-billion dollar industry with no slowing in sight.

(Adapted from “Who Made That Dog Biscuit?”, The New York Times Magazine)

Ready to find out what’s new in dog treats?

Today’s permutations of Spratt’s original dog biscuit and then Milk-Bones are truly astounding. Consider, for example…

Today you can get dog treats made with ethically sourced exotic meats – nutria, ostrich, crocodile, and kangaroo meat, for instance. A good example is the nutria treats produced by Louisiana-based Marsh Dog. Production of these cookie-like treats benefits Louisiana’s wetlands because the nutria is an invasive species that destroy wetland areas.

You can also get a variety of treats with supplements added to enhance your dog’s health. Top sellers among these are the treats with added glucosamine and other supplements that promote joint health to keep active dogs active and pain-free. These treats are great for larger dogs that are prone to hip and joint problems.

Is it really that surprising that what’s new in dog treats is sustainable dog treats?!

You knew it had to happen – environmentally friendly dog treats. A front runner among the companies that produce these is Annamaet Petfoods. They use an artisanal production method that allows for small, slow-cooked batches of treats, and they utilize only sustainable sources of Omega 3 fatty acids. In addition, they have recently introduced degradable, sustainable packaging.

We come now to the latest development in pet treats – hand-made gourmet dog treats. These are typically custom-baked dog treats, often made with human-grade ingredients, and usually cookies or cupcakes.

A few specialty bakeries now offer dog-friendly cookies to allow you to spoil your pets with tasty baked goods. The Two Tails Dog Bakery, for example, makes a variety of colorful dog cookies replete with dog-safe icing. These treats are “baked and decorated by hand with great care to bring delicious flavor to dogs and joy to their owners.”

When it comes to the ultra-special dog treats, you can now get custom-baked cupcakes designed and created specifically for your pets. Dog-friendly cupcakes provide a great way to celebrate special days in your pet’s life, especially birthdays. We never have our furry family members as long as we’d like, and doggie cupcakes provide something special to commemorate the special days while we still can.

One of the top bakers – if popularity and success are any gauges – of the dog-friendly cupcake is The Queen’s Cups of Worcester, Massachusetts. Founded and guided by Renee Diaz (née King), The Queen’s Cups, a custom cupcake shop and bakery that specializes in cupcakes of all kinds, but especially those for your beloved pets . . . called Pupcakes.

Their Pupcakes are human-edible cupcakes with a small Milk-Bone adorning the top (a concession to tradition and the very first dog treat). Pupcakes are made with healthy ingredients like peanut butter, honey, oats, and carrots and made to look appealing to pets and their owners. You can even eat them yourself if you want, but then your pups won’t get theirs.

Dog owners typically buy Pupcakes to celebrate their pets’ birthdays and other special occasions. And many people come in daily to get their dog a Pupcake because . . . well, just because. In addition, the popularity of Pupcakes has resulted in some well-received spin-off dog treats such as big sellers like the Nutella cookies and chocolate chip cookies.

As a natural outgrowth of the popularity of Pupcakes, Renee and The Queen’s Cups team soon got involved in the hottest trend in pet accessories – dog bandanas. They now offer dog bandanas bearing The Queen’s Cups logo. You can go to The Queen’s Cups, get yourself a sweet treat, get your furry friend what’s new in dog treats, and set your pet up with some cool new pet attire.

Wholesale For Everyone – The Bandana Source

And where does Renee get her bandanas? From Wholesale For Everyone, of course.

To keep customers happy and their pets fetchingly attired, the folks at Queen’s Cup order their bandanas only from Wholesale for Everyone. Why? For two reasons, according to Barbara King (Renee’s mother and second in command): “Price and awesome customer service. They are,” she said, “very easy to work with.”

Barbara summed it up like this: “Dan at Wholesale For Everyone was looking out for our best interests.”

Make sure to get your pup what’s new in dog treats and a bandana at WFE!

Discover Pupcakes . . . Where Dog Treats and Cupcakes Meet at The Queen’s Cups

Women Prefer to Sleep With Their Dogs: Find Out Why