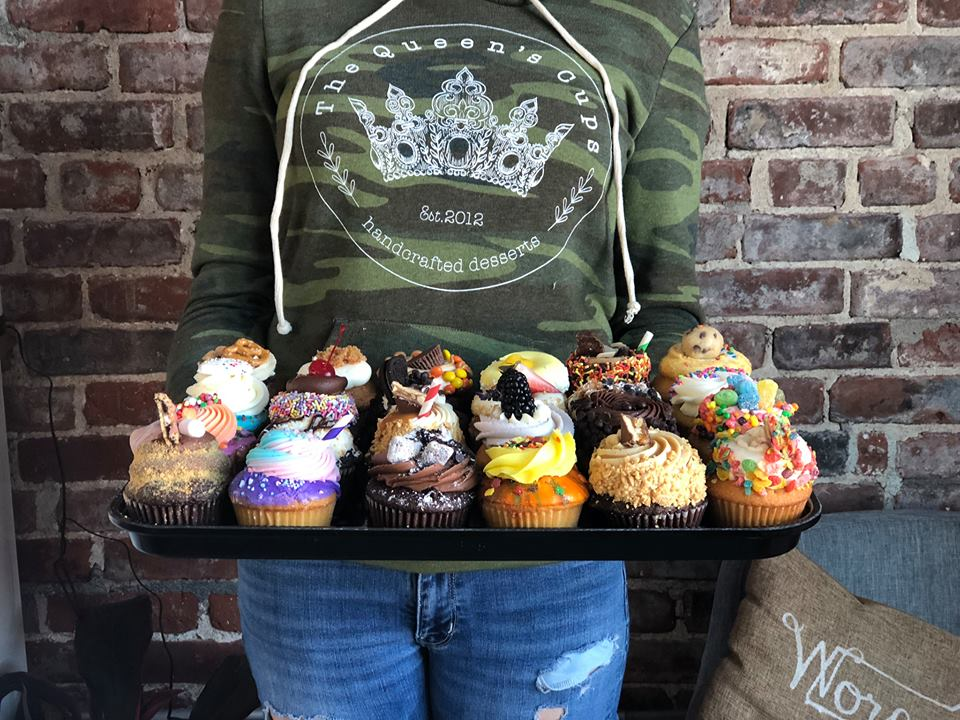 What do you get when you cross dog treats with cupcakes? Why, Pupcakes, of course – the newest in dog treats.

And Pupcakes is the brainchild of Renee Diaz (née King), founder of The Queen’s Cups, a custom cupcake shop and bakery that specializes in cupcakes of all kinds, but especially those for your beloved pets. So, you’re probably wondering how all this came about…

Fresh out of college with a psychology degree, Renee founded The Queen’s Cups seven years ago when she was only 23 years old. It is a Worcester, MA, bakery specializing in cupcakes. And Renee has been selling Pupcakes for the past five years.

After graduating from college, Renee found herself doing a lot of baking in her parents’ kitchen because she had both a love and a talent for it. “She began showcasing her products on social media and, before she knew it, had quite the following. With the help of her parents, she opened a small shop in Millbury, MA.

“However, during this time business exploded, and The Queen’s Cups moved to its new location in Worcester where they bake delicious desserts, hold events, host amazing musicians and more. The Queen’s Cups has become a destination for visitors from across the country.”

Despite the success and explosive growth, The Queen’s Cups remains a family affair. Renee’s father, Paul King, is one of the baker’s and originator of the Pupcakes recipe, and her mother, Barbara King, takes care of a multitude of business-related tasks. And then there’s the name – The Queen’s Cups – which is an obvious play on the family surname, King.

Today, The Queen’s Cups sells well over 250 Pupcakes, as well as hundreds of other cupcakes of all kinds, every week. And that’s in addition to their other many baked goods – cookies, brownies, whoopie pies, cinnamon rolls, and more – as well as their in-demand catering services and the special events they sponsor.

Renee’s advice to aspiring entrepreneurs like herself? “[F]ollow your passions and work hard. The rest will find a way of taking care of itself.”

If Renee’s success is any measure, that’s sound advice.

The Genesis of Pupcakes

Spending on pet food and pet treats passed the $32-billion mark in 2018. And “the majority of pet owners consider their pets to be family members and are willing to go the extra mile to make sure their furry friends are well pampered” (American Veterinarian). “In 2004, 77.2% pf dog-owning households purchased treats for their pets,” and in 2015 17% of dog owners spent more than $30 a month on dog treats (Pet Food Industry).

Still, some of the team at The Queen’s Cups had some doubts about Pupcakes in the beginning . . .

They were having a conversation one day and batting around the idea of dog treats, especially cupcakes for dogs. Renee’s dad, Paul, said no one would buy such a thing. Nevertheless, he said he’d research it and see what he could come up with. So Paul came up with a recipe, and they got to work.

And Pupcakes were unleashed on the world…

In short order, Pupcakes became one of Queen’s Cups’ top sellers. It was their most-sold cupcake in the first tally of sales results. Now, Pupcakes maintain a position among the top five best selling cupcakes, usually holding a spot around number four.

“But just what is a Pupcake,” you ask. Well, it’s a cupcake for dogs, as the name suggests. But, really, it’s more than that.

Basically, a pupcake is a human-edible cupcake with a Milk Bone-like dog treats placed on top. It is made with healthy ingredients like peanut butter, honey, oats, and carrots and made to look appealing to pets and their owners. You can eat them if you want, but then your pups won’t get theirs.

Typically, dog owners buy their pets Pupcakes to celebrate their birthdays and other special occasions. And many people come in daily to get their dog a Pupcake because . . . well, just because. In addition, the popularity of Pupcakes has resulted in some well-received spin-off dog treats such as big sellers like the Nutella cookies and chocolate chip cookies.

Take a look at these examples…

The Dog-Friendly Bakery and Bandanas

As should be plain by now, The Queen’s Cups isn’t your typical cupcake-producing bakery. Nope, not in the least. Because the Queen’s Cups is a dog-friendly bakery, it has that special, added dimension that is so rare.

For example, Barbara told us, a woman who tutors bring her students to The Queen’s Cups for the tutoring sessions. And the student brings along his dog. So while the woman tutors and the student learns, the dog spends his time happily munching Pupcakes.

It was only natural, then, that they would get involved in the hottest trend in pet accessories – dog bandanas. They thought it would be a nifty marketing idea, but on mentioning it to customers, they were surprised at the response.

Customers said they wanted the dog bandanas and would buy them. So now dog bandanas bearing The Queen’s Cups logo are in the works and will soon be available. Soon, you can go to The Queen’s Cups, get yourself a sweet treat, get your dog a Pupcake, and set your pet up with some cool new pet attire.

To keep customers happy and their pets fetchingly attired, the folks at Queen’s Cup had to get their bandanas somewhere. So as the idea for dog bandanas took shape, they (naturally) Googled “dog bandanas.” And one of the top results they got was for Wholesale for Everyone. They ordered some, and that clinched the deal.

When asked why Queen’s Cups now gets all their dog bandanas from Wholesale For Everyone, Barbara King (Renee’s Mother and second in command) had a ready answer: “Price and awesome customer service. They are,” she said, “very easy to work with.”

Here’s are a couple of examples…

And another time, Renee placed an order for larger bandanas. So, again, Dan called and advised ordering a variety of sizes so that they could try them out and see what worked best – instead of ordering a large quantity of a single size that might not work.

Barbara summed it up like this: “Dan at Wholesale For Everyone was looking out for our best interests.”

Renee and The Queen’s Cups team are also deeply involved with local charities. In fact, they discourage tips for staff and encourage customers, instead of tipping, to donate that money to local charities.

So every month, The Queen’s Cups chooses a different charity to support. For April it is the Worcester Animal Rescue League (WARL).

Founded in 1912, the WARL is “dedicated to the care of the animals who provide so much for their human companions.” Originally founded to “save overworked and abused farm horses,” the organization has “expanded and changed to protect, care, and love our cats and dogs throughout Central Massachusetts. Our staff and volunteers have dedicated champions to this cause and act as caretakers for the animals and educators to their human counterparts.”

Good food and the support of good causes at The Queen’s Cups – what could be a better combination?

Going Above and Beyond

Why have Renee and The Queen’s Cups been so successful so fast? It’s simple really.

Of course, tasty, quality products that keep people coming back is an important ingredient in the recipe. More important, though, is the fact that Renee is more than just an entrepreneur and The Queen’s Cups is more than a mere business. Giving back to and supporting the community is the key ingredient.

Among many other awards, Renee was just selected this March by the SBA as the 2019 Young Entrepreneur of the Year in Massachusetts. The selection criteria for this award include community support and involvement – not just business acumen. “I am so grateful,” Renee said, “to be recognized for the work I have tried to do with my staff and community. Thank you to everyone who has helped me along the way.”

You can contact Renee and the team at The Queen’s Cups by emailing info@thequeenscups.com or by filling out the form. Or check out their Facebook page for news, events, and tons of photos of both goodies and happy dogs.

Women Prefer to Sleep With Their Dogs: Find Out Why